Hello Friends - Today I am bring you another fun card. This one is a winter scene. Penguin, Seal and Polar Bear have all worked real hard on building a snowman.

I created a shaker card and use the New Released Sparkle Blend Frozen. I love this mix it has hues of Blue, soft Teals and white. Some snowflakes, small crystals in both clear and pale blue. This Sparkle Blend along with all the other Sparkle Blend can be purchased at White Rose Crafts LLC 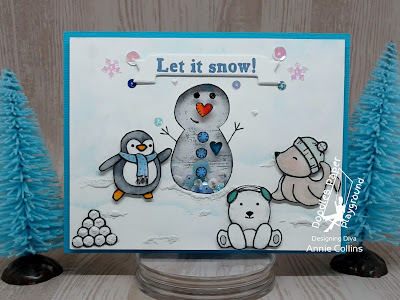 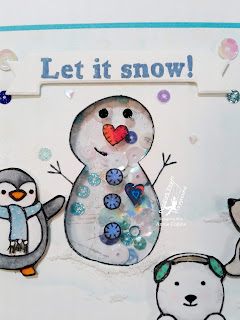 To create the shaker I simply stamped the snowman image and cut away the body leaving only his arms. I then trimmed his buttons, nose and eyes to adhere them to the top of the clear acetate. I stamped and colored the other images. I then fussy cut them out and set them aside. Next, I created the back background on the same card front that I stamped snowman. I use I cloud stencil with Distress Ink to create the snow and to give a bit of color to the sky. I then sprinkled a bit of water and dried it off.

Next, I add a bit of DecoArt Snow Writer to the snow banks I created with the stencil. I also added a bit to snowball pile. Once the snow writer effects were dry I added the buttons, nose and eye to the snowman. I then flipped over the card front panel and put foam adhesive to the back to create the channel for my Frozen Sparkle Blend to sit in - then I placed a small piece of white and silver pattern paper to seal in the Frozen Sparkle Blend. Then, I adhered the card front panel to an A2 teal cardbase.

Next, I adhered the penguin, seal and polar bear using low profile foam adhesive. I adhered to the snowball pile directly to the panel - since it has the snow writer effect it has plenty of dimension. I stamped the sentiment and die cut it on a banner. For finishing touches I add a few sequins from the Frozen Sparkle Blend around the sentiment and snowman. I also added a bit of Clear Wink of Stella to the accessories (scarf, hat & earmuffs) as well as the sentiment. 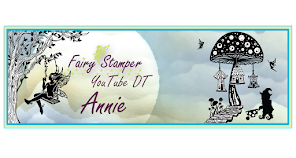 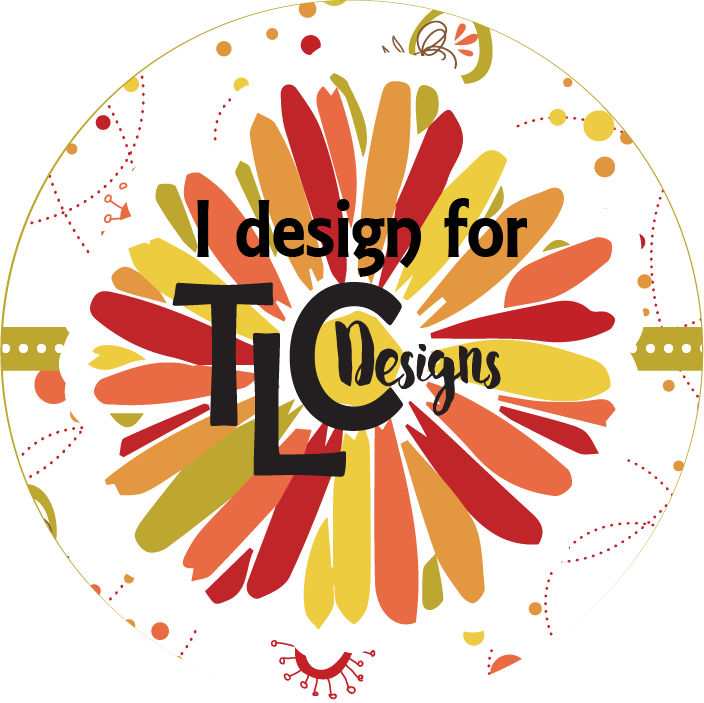 I Currently Design for:

A Perfect Time to Craft